President’s Wine Snips – Those Who Came Before

As I sat down to write my first Wine Press article as President, I thought about all the things I could say to the OCWS membership over the next 12 months. I could easily recap events that have just taken place, or I could highlight upcoming events. These are things that, if you read this newsletter every month, each Chair of these gatherings is sharing with you in their articles with far more interesting detail than I can. I also thought about all the questions I have been asked as a Director over the past five years and realized that I have been given a platform to tell you things about the organization and the people involved that you otherwise might not know and, just maybe, answer some of those questions that have crossed your mind at one time or another.

As the incoming President of the OCWS, I would be remiss if I didn’t use this first article to pay homage to those who came before me and set the tone for this amazing organization. After being a member for 17 years and a Director for the past five, I thought I knew a lot about the OCWS. After studying the list of Presidents beginning in 1978, I realized the one thing I didn’t know as well as I could is the history and commitment of the 24 people who served as President before me. Many of them served multiple terms, and through their encouragement and kindness, have held my hand and heart on my journey to the presidency. 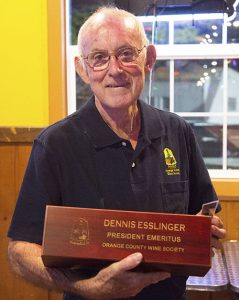 With that being said, we honored one of those individuals at our recent Annual Business Meeting with the designation of President Emeritus. The title denotes the perpetual status of an individual who has helped move the organization to new heights as a former key member on the Board of Directors. In this case, as President an unprecedented four terms (2000-01, 2002-03, 2008-09, 2013-14), with none of those terms consecutive. This year Dennis Esslinger joined the ranks of just a few who have garnered the President Emeritus title. He joins a small, elite group of past Presidents who not only gave their time and effort over a number of years, but continue to do so and for that I, for one, am grateful.

My heartfelt thanks go to the current Board of Directors for electing me to this office and having the confidence in me to lead the organization for the next Board year. 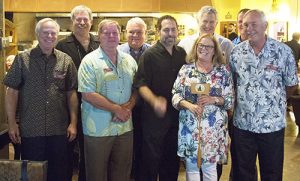 In closing, if there is anything you would like to see answered in this column over the next several months, please email me at Fran@ocws.org. I can’t promise everything will be addressed in this column, but I will do my best to answer everything asked of me in one way or another.