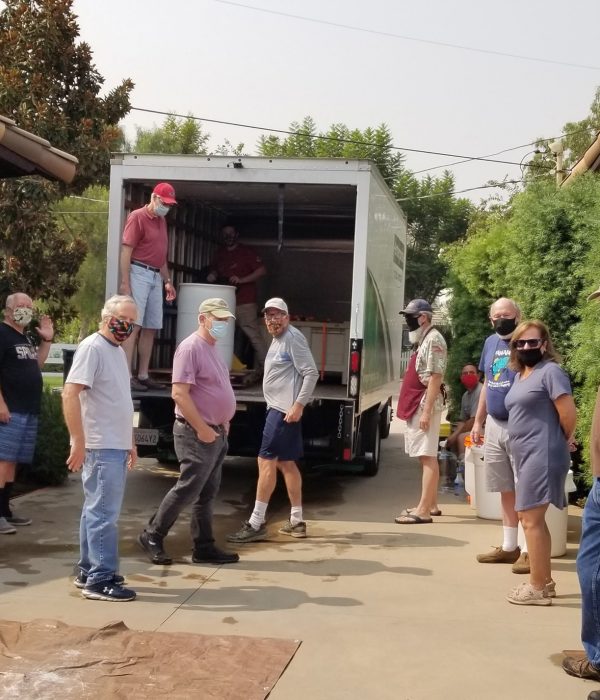 The Winemakers’ Group completed its most difficult grape crush season in several years, with the northern California fires and the unseasonably warm weather causing cancellations and revamping of schedules. Bill Forsch made our first delivery in September which was Cabernet Franc and Rosé of Malbec from Emerald Creek Winery in Warner Springs, a newer second year supplier to the group. Chris van Aylea and Bruce Powers were able to arrange for purchase of Cabernet Sauvignon grapes from Paso Robles.

Bruce Powers also made a “solo” run up to Paso Robles and brought back Merlot from Stillwater Vineyards in Paso Robles to substitute for Chris’ Dry Creek Valley Merlot which was destroyed by smoke taint. That was delivered in late September. Bill Forsch delivered Syrah and Dolcetto grapes from Lucas and Lewellen on Sunday, October 4.

Bruce made our final delivery on Sunday, October 9, when he brought down Chardonnay purchased from Lucas & Lewellen, also as a substitute for the Dry Creek Chardonnay that was destroyed by smoke taint. All of our deliveries were made to Bruce Powers’ winery this year which made for a very organized process. We cannot thank Bruce enough for opening his home and winery for the group deliveries, something he has done now for at least 3 years in a row. The total of deliveries was about 17,000 lbs. of grapes and juice! Or enough to bottle about 6,000 bottles!

This year Bill Forsch experimented by providing a “packet” of enzymes, yeasts, yeast foods, and other additives to be used for the complete fermentation of each winemakers’ wines that they purchased, all as a part of their grape purchases. This was done to assist the newer winemakers, in particular, to ensure they were able to ferment grapes to completion in a stable manner with the prospect of having a nice wine when completed. We received very positive feedback on these pre-prepared kits.

We want to thank Bruce and Bill for the enormous amount of work they did in arranging for the purchase, transport and delivery of the grapes, and for Bill’s efforts in preparing the fermentation kits. It is this kind of consistent effort that makes the group grape purchases so successful.

As you now know, Kevin Donnelly has been elected to the OCWS Board of Directors and has also been named its President for the coming year. Kevin has done a tremendous job of steering the Winemakers’ Group following the many years of Jim Graver’s excellent leadership. Now that Kevin has taken on new responsibilities, he has asked for volunteers to lead the Winemakers’ Group, and Bill Forsch has agreed to take on that role, with the assistance of others in supportive roles.

Bill has been an integral part of the Winemakers’ Group for many years and has consistently gone above and beyond what was needed for the group. Bill also consistently thinks of others—as part of the most recent Syrah purchase, he delivered Syrah grapes to an elderly group of winemakers who were making a “tribute” wine for one of the former OCWS members and winemakers.  He has taught classes for several years about making wine from kits and is always thinking of ideas for how to make winemaking easier for the newer winemakers. Please join us in thanking Bill for his past efforts and agreeing to help him in this new role.