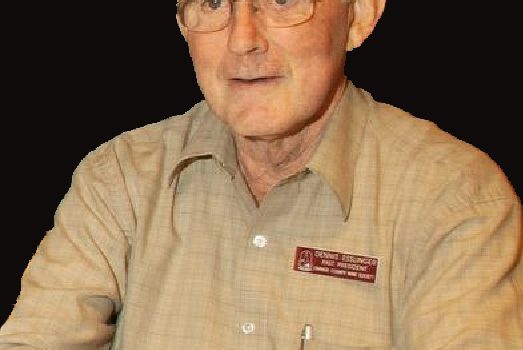 The OCWS has lost one of its most significant members, Dennis Esslinger, due to cancer and unrelated to the COVID pandemic. In 2017 during the Annual Business Meeting, Jim Beard, then President, awarded Dennis the highest award an OCWS President can bestow, the President Emeritus Award. Past President, Fran Gitsham, eloquently stated in 2017 that the President Emeritus title “denotes the perpetual status of an individual who has helped move the organization to new heights as a former key member on the Board of Directors. In this case, as President an unprecedented four terms (2000-01, 2002-03, 2008-09, 2013-14), with none of those terms consecutive . . . Dennis Esslinger joined the ranks of just a few who have garnered the President Emeritus title. He joins a small, elite group of past Presidents who not only gave their time and effort over a number of years, but continues to do so.”

As a recipient of the highest level year end awards, along with his wife Carol who worked with him side by side, Dennis passed away Monday, July 6, at his home.

Dennis was a longtime employee of Hughes Corporation, then Raytheon in Fullerton, working as a Project Manager until he retired. These skills served him well in various organizational and administrative capacities with the OCWS. He served on the Commercial Wine Competition Committee for well over 20 years working with others in developing the format for cataloging wines. He then took over as Chairman of the Competition and then Chairman of Judges for 10 years before turning that position over to Kevin Coy.

Dennis was very highly regarded by winemakers and winery owners which showed in the respect they have for the Commercial Wine Competition and their desire to appear for our winery tasting programs for which Dennis was in charge for a few years.

Dennis traveled the world with Carol and their children for many years in his position with Hughes. The traveling never stopped once he became active with the OCWS as he embarked upon a number of wine trips with friends to wineries, wine tastings at ZAP, and meeting with family winemakers as a member of the Commercial Wine Competition. He maintained a close circle of OCWS friends throughout the years who enjoyed his kindness, generosity, and reverence.

Raised in Kansas and a graduate of Kansas State, his work ethic and skills were valued in the OC Fair Courtyard where he and Carol put in many hours in preparing The Courtyard, setting up the wine cellar, maintaining, stewarding, managing and teaching about wine. His calm demeanor allowed him to deal with honesty and humor any time problems or disagreements arose in the OCWS or during the OC Fair. Dennis’ activities preparing for and working the Annual Wine Auction allowed this event to be our biggest single revenue producer outside The Courtyard during the OC Fair.

It would be impossible to say just how many accolades Dennis received from the OCWS, Judges, friends and co-workers. What he has contributed to the OCWS will be evident once the pandemic is under control and we return to normal activities with the OCWS.

We ask you to raise a glass of wine for Dennis and in support of Carol and the family who will need all our good thoughts and prayers.

Dennis, we will miss you terribly.