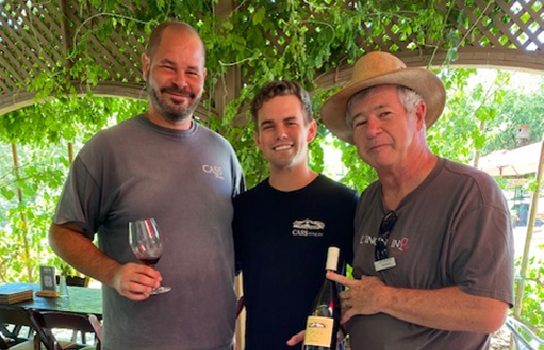 Manuela and I continued our trip north leaving behind Paso Robles and Santa Rosa. Our ultimate destination – Point Arena, Mendocino County. Okay, you probably never heard of it; it’s a very small town, and there are no nearby wineries, but we had a great stay at an extremely cozy timeshare resort tucked in among some beautiful trees and rolling hills. During our seven-day stay, we traveled the area. We went a bit farther north to the city of Mendocino and east in the Russian River, Alexander Valley and Anderson Valley, where we made every effort to hit some of our favorite wineries but to also have that chance encounter with new ones. Manuela did the research, I did the driving!

On Day 8, we did a precarious trip over the mountains to Boonville in Anderson Valley, where our first stop was Bee Hunter Wine. It was a country-style shop on the main street of Boonville built in the 1920’s that looked to have been there awhile. We arrived a tad early and found the winery open but no one there. Shortly, though, Andy, of the husband-wife owners, showed up with a puppy in hand. He had to run, but asked if we would puppy-sit until his wife Alisa showed up. Well that’s trust!  What could I say: we agreed!

When Alisa, aka Ali, arrived with a second puppy in hand, we enjoyed a very pleasant conversation and, along with it, some excellent wines including several outstanding Pinot Noirs. I particularly liked their 2014 Pinot. The tasting room had only opened in 2019, pre-pandemic. And, the owners had not participated in the OC Fair wine competition, but had several awards from more local competitions. I encouraged them to submit to our commercial competition, which only requires that it be obtainable in SoCal. I think it will happen, so watch for Bee Hunter Wine next year!  The photo shows our two new friends at Bee Hunter Wine!

Still in Anderson Valley, we stopped at an old favorite – Toulouse Vineyards in Philo, California. Toulouse produces some great Pinot Noir. As they like to say, “Too tense?  Toulouse!”

This was followed by a new find, Husch Vineyards, also in Philo. Tucked among some hills as a backdrop, this was a very charming and friendly winery with some outstanding Pinots, Merlot and Gewürztraminers. Husch, a family-owned winery, showed a creativity in presenting its tasting options – six tastes already poured in very small carafes and brought out in a six-place cardboard carrier. And, should you decide to purchase any of these wines, its price list came with the six tastes already highlighted. No need to hunt them down. Very smart!

What I discovered later was that Husch Vineyards submits to the OC Fair Wine Competition. For 2021, Husch was an award winner, receiving 12 medals, including one Double Gold and Best in Class for its 2017 dry, late harvest Gewürztraminer.

We encountered several more wineries in the Mendocino area, but a highlight was a very small, very out-of-the-way place called Annapolis Winery in Sonoma County. And what a great find it was! Run by Aaron and his mother, Barbara Scalabrini (Italian if I ever heard it), we found these wines to be stellar, potential award winners in their own right!  The locally grown Pinot Noirs and Gewürztraminers were remarkable. Served by Aaron personally, it was clear that he was very proud of what he, his family and friends had achieved.

Aaron told me that his production was too small to compete in the local Northern California wine competitions – they produce about a thousand cases. I have since sent him info about the OC Fair Wine Competition since production size is not a factor for entering. Let’s see what happens next year!

As our week in Mendocino County came to an end and we started to head back south, we made a stop along the Russian River. Finding a “winery open” sign on the road, we stopped at a barn-like structure of Davis Family Vineyards. Guy Davis, the owner, was out in the fields, but our server Sheila was both accommodating and informative. She told us that Guy goes full French style in the production of his wines. It was quite evident. The wines that we were able to taste were incredible. She also told us that Guy Davis provides his grapes to well-known restauranteur, Guy Fieri, for the production of his wine under the name Hunt & Ryde (named after his children Hunter and Ryder). That should be taken as a testimonial of the quality of the grapes.

We stayed in the Santa Cruz area for our last three days, joined by our OCWS friends, Kelly and Dimitri. And as before, we continued to find great wineries with interesting nuances to them. For example, at Wrights Station of Los Gatos, we arrived to witness a truck in the parking lot that was a focus of activity. It was a fully functional mobile bottling operation that was serving the local very-small wineries. Who knew? I was privileged to get a tour of the system. The photo shows a bit of the operation from the back end.

There were several other wineries that we got to visit on this trip, but I will tell you of one more, the last one we visited. In an attempt to find another winery along the back roads near Salinas, Manuela says, “Hey, there’s an ‘open’ sign.” So, of course, we had to check it out. And it was the best thing we did. We encountered Odonata Wines, out in the middle of Salinas farmland. We arrived before the crowds which gave us the opportunity to not only taste some excellent wines, but to chat with the Hospitality Manager, Jorge Muñoz, and later, the assistant winemaker, Junior Bañuelos. We spent several hours there with Jorge and Junior enjoying the Odonata wines, learning that the name refers to the dragonfly. Much later we found out that the owner of Odonata was helping Junior become his own winemaker.

Soon we were tasting his own wine under the label of Sling | Stone, a reference to taking on Goliath. We couldn’t leave without ordering a case of both wines!  It was quite the trip.

I would be amiss if I did not at least list the other wonderful wineries we found. I would love to share our experiences with them, but for now, I will list them for you to go check them out: